Anyways, without further a due, these are the albums I’m currently listening to.

If you haven’t heard of this dude, he’s an aussie rapper/ hip hop artist. Mmm… I know what you’re thinking. An Australian rapper? really!?. I get it, Australian rap is a contentious issue and maybe I’m biased but I just love authenticity of his voice. I love that you can feel his passion in his voice.
I’m super pumped to see him at SITG.
He’s weirdly attractive despite his neck+hand tattoos plus, behind his hardcore facade I reckon he’s a really gentle guy.
My favorite track is Killer. The song has a boss video clip to go with it, so check it out.

It’s been wicked watching Fun. grow these past few years and getting the recognition they deserve. I feel in love with Nate Ruess back in the day he was the frontman for The Format. His voice is so quirky and adorably different that it makes me feel like jelly inside. This album is really… well… for lack of a better word… fun. It’s really lively and mostly upbeat- probably something I’d listen to at the gym.
My favorite track is It Gets Better. It’s a really happy tune that kind of encapsulates what these three legendary guys are about and everything that I love them for.

The Shins- Port of Morrow 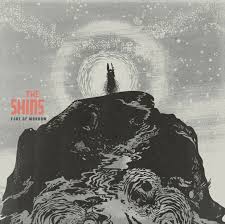 The only way I can really describe this album or really any album by The Shins is… totally chillaxed. James Mercer is a god… His voice sounds like it has been refined by a rare, majestical audio filter (in a good way). I find that their albums are kind of hard to get into but gosh, once you are into them, their tracks don’t expire. I’ve been listening to Simple Song and Fall of 82′ on repeat.
The album makes me want to gracefully sway about and hectically head-bang simultaneously.
I would listen to these tracks on the train home from a long day or at my computer, whilst I mindlessly lurk the web.

This album is very unlike anything I’d usually listen to. Each track is insanely chilling in it’s own way. I feel like when I’m listening to this album I can’t really be doing anything else- that her music requires my full attention which is a pretty amazing thing.
Each individual song tells a powerful story. I kid you not, a feature length film could be made out of any one of these songs.
Massive props to Kate Miller-Heidke on this quirky, intense new album.